Just a random idea for voicemail. I find voicemail really old school and a bit annoying to use. What if it was better?

Just some ideas. Got any more?

What if it was better?

This is something we’re looking into. Our supplier currently handles all things voicemail, but we’d like to bring it in-house. It means some work on their side to intercept a couple of call flows, and they haven’t had this request before so TBC on how long it’ll take…

It’d be a good first step before a full SIP implementation though!

Most of your ideas for visual voicemail are actually standardized in the OMTP VVM specification. If the carrier supports this, then Android (and iOS? Not sure if they require something proprietary) can handle the visual voicemail with scrubbing part on it’s own.

I’m always a little reluctant to do something proprietary when there’s an open standard for a technology, but I can understand the reasons for doing it (I’m pretty sure the speech-to-text part isn’t standardized for instance). Personally I have my voicemail disabled since I only expect people to ring me when they need my immediate attention (otherwise they can text or email).

I don’t think these are at odds — we’d love to support the VVM spec, and also make it available via other means (from the web, API).

Why make the user phone a number for voicemail at all? Can we display voicemails in the app, as audio files we can play at will? 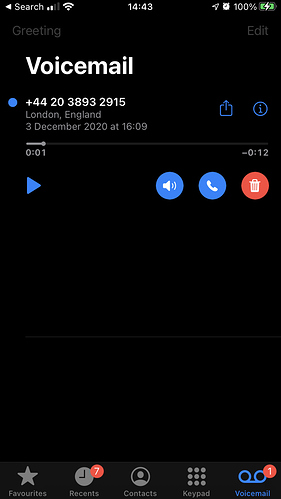 Is voicemail something that’s actually worth spending time on in 2021? I’ve had mine disabled for years and don’t seem to have missed anything. The only improvement I would suggest is that it should be disabled by default.

Turning off voicemail entirely was one of the first Zevvle features I took advantage of.

What is visual voicemail? A recorded video message?

What is visual voicemail? A recorded video message?

An audio player for audio voice messages. The visual bit being able to see the list of messages, their details of when they came, how long they are, and who from. You can also scrub along the timeline for an audio message to be able to get to a particular point.

I’ve had mine disabled for years and don’t seem to have missed anything.

I’ve had a few from organisation such as the kid’s school or partner. Though later can be a where are you, but I either didn’t hear the phone or can’t answer as currently cycling.

I’ve also got a bit of an odd setup where my landline redirects to my mobile. So if I don’t answer the voip landline handsets, my mobile rings, and if the mobile isn’t then answered, then the Zevvle voicemail picks it up. I kinda would rather it go back to the voip voicemail, as if it’s then a call for someone else in the household I can forward the email with the message to that person.

Might be able to do both of those things (redirect to custom number if not answered, change time delay) with special GSM USSD service codes— in theory it would work though not sure whether or not the network supports it.

redirect to custom number if not answered

We could likely do that; not sure about the time delay…

Could be worth trying these and see if they are supported by the host network?

Ah nice, those are the codes I was referring to earlier — definitely worth a go!

Is voicemail something that’s actually worth spending time on in 2021? I’ve had mine disabled for years and don’t seem to have missed anything. The only improvement I would suggest is that it should be disabled by default.

Just my two pence here, but isn’t the reason you – and others – likely don’t use voicemail is because… honestly… it kind of sucks in its standard implementation. I know whenever I get a voicemail, I really can’t be bothered with the whole deal of listening through the automated voice, fumbling around with the keypad, finally getting to the message, having to decipher the phone number in my head if its a voice I don’t recognise, and then having to probably replay the message over and over to hear some tiny detail that got lost.

Still remember the day when someone showed me “visual voicemail” (using VVM) almost 10 years ago and I was pretty amazed by it: it still astounds me that in 2021 its not the de-facto standard across carriers. The idea and early proprietary implementation itself dates back all the way to 2007!

Also exists in Android too, finally!

I’ve had VVM and I find it still terrible. Now I believe there’s a way to have the messages transcribed into text which would make it better, but honestly, why not just send text/emails in the first place and forego the lossy speech recognition step?

Because it’s harder to get estate agents, builders, solicitors etc. to use textual forms of communication than it is to put a bunch of engineering work into voice mail!

Interesting, mine is currently set to 20 seconds. The call forwarding number looks like a normal mobile number, starting +44787 ending 0555.

Just in case this thread is giving anyone ideas that nobody wants voicemail improvements, I’m still patiently waiting for visual voicemail. Useful and sorely missed function for me, even at my low volume of usage.