This is behind a paywall but you can read the first few paragraphs.

What is says here is precisely the reason I find Zevvle interesting. I have data anxiety and way over estimate (and overpay) for my actual usage. Do you know how much mobile data you use each month? You’re not alone, but don’t expect your network to shed any light on the situation. Billmonitor, a website that analyses phone contracts, says that

… and way over estimate (and overpay) for my actual usage.

This exactly! The data is hard to come by (for good reason…), but from the little I’ve seen £800m seems to be on the low-end.

To repurpose what Upton Sinclair said, “It is difficult to get a company to help you understand something, when their income depends on you not understanding it.”

What a lot of people don’t seem to realise is that metered data is a scam, whether the metrics are clear or not.

The idea behind limited data is to reduce network congestion - there is a physical limit as to how much data you can send through the air on a particular frequency in a particular area before interference gets too high and the entire thing breaks down.

The issue here though is that limiting data is a poor solution for this - first it doesn’t prevent people from congesting the network, they just need to have enough “data” remaining. That’s why networks can still get congested and collapse in crowded areas despite limited data.

The other issue is that it penalises usage even when there’s no risk of congestion. If it’s a Sunday at night and there’s one one user on a particular tower, it would cost the carrier more to prevent the user from using it (because they exceeded their data cap for example) - the carrier still has to pay rent for the land, the electricity, fibre and the actual equipment - whether it’s being used or not. It would be more profitable to use this equipment to deliver value to a customer rather than let it run for nothing.

It also prevents innovation - there are a lot of applications that would be possible with unlimited (even if low-bandwidth) data.

The proper way to do this (IMO) is to sell bandwidth, not amount of data transferred. The more you pay, the more slices of overall capacity you are allocated. So if you pay for 2Mbps, you can be fairly certain that you can always use those 2Mbps (the carrier shouldn’t sell more of these plans in any given area than the network can physically support), and you can use it as much as you want.

This is similar to DSL or any other wired connection - they sell me a pipe and I pay for that pipe. It doesn’t matter how much data actually goes through that pipe, if any.

Currently on holiday in Thailand and they have the same approach to data as most uk providers but also paying for unlimited data but for a time period and speed.
Think it’s a good approach 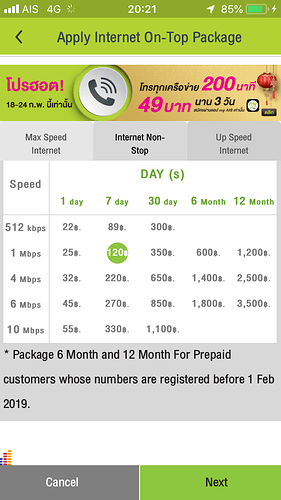 This is brilliant. What do those prices mean in pounds, approximately? (let’s say how much is the 10Mbps one for a month)

Shame though that some of them are only for a month. Even if the original idea is sound it seems there’s always someone to ruin user experience in this industry. Presumably it’s designed so you haver to “top-up” and be exposed to “offers” (aka cancer) while doing so at least once a month…

At the moment 100bht is about £2.40
I don’t know what there contract pricing would be as I’m only on prepaid.
There is a lot of offers and packages. But the app to add WiFi or internet on top is good.

Seems affordable enough if it means pay the same price every month and forget about it.

The option is also there to pay for max speed but at volume.
I like the flexibility that is on offer. 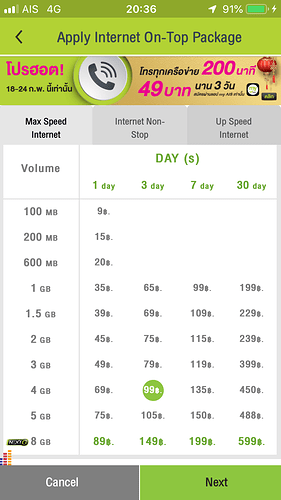