We no longer check for updates on app start, meaning a faster launch time (ideally — in testing on fast Wi-Fi there isn’t much of a difference, but it’ll be quicker if you’re on a slower connection). This also means the app won’t flash randomly when you open it if there’s an update.

Instead, you’ll need to update manually. A little exclamation mark will show on the account tab to indicate it:

And you can update the app from there: 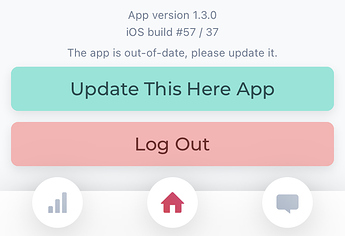 Have a great week,

I guess I’m not on the latest version yet as I don’t have that little head top left but I’m damned if I can find where the current version number is shown.

It should either show that icon or an image from your contacts (taken from matching the SIM number) — if you tap on that and and scroll down to the bottom where you log out, the version number should show… if not I’ll look into what’s happening there!

I think I’ve figured out how to cause a crash. Press the home button while on the home screen. Odd, I can’t reproduce it any more…

Press the home button while on the home screen. Odd, I can’t reproduce it any more…

Odd, me neither — will keep an eye out. We didn’t get any crash notifications for it…

Haven’t upgraded yet so my query is where is the version number in the old one ? I’m sure I’ve seen it before but can’t find it now. Guess I should just upgrade anyway.

Haven’t upgraded yet so my query is where is the version number in the old one ?

It should still be in the same place — we didn’t change that. Is the icon/image not showing on the top left?

Will get that fixed, thank you!

Out of curiosity what do you use for crash monitoring ? I assume a third party tool that has cross platform support

Out of curiosity what do you use for crash monitoring ?

ohh looks lovely! Time to forward to my project manager

It is good! Installation is quite easy too…

Is it just me, or has the bar on the usage page to get the history by month summary gone?

Yes, there were a few breaking changes there and we removed it temporarily until we update them very soon.