Turns out you can teach an old dog new tricks! 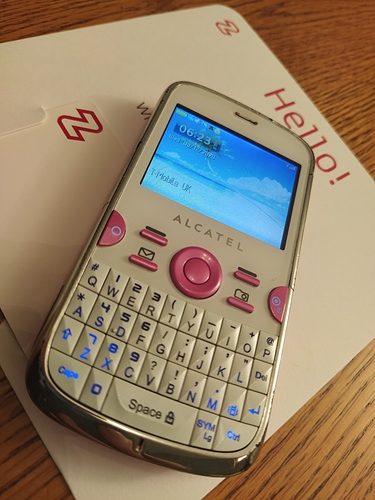 Ordered a second SIM as a throwaway number, and decided, what the heck, let’s try and get an old pink Alcatel Onetouch OT-799X that’s been sitting in a drawer for a bunch of years going again. I can’t use my main phone anyways; even though its dual-SIM, its one of those 3-choose-2 trays which means if there’s an SD card in it there can only be one SIM.

Plugged it in and to my surprise the battery could actually hold a charge: impressive considering how poor the battery life was when this thing was all shiny and new. Oh cool, there’s an SD card slot too: perfect for loading up some ancient J2ME apps on it! And wow, no headphone jack: way ahead of its time.

The biggest surprise was the fact the Zevvle SIM even worked. I expected by now that EE would no longer support “2G”, but sure enough, it did work. As you can see, its even showing it as “T-Mobile UK” on the display.

Getting the Internet working was the hardest part as it didn’t come pre-loaded with EE’s APN settings. But a quick Google DuckDuckGo found them in no time. For those of you wanting to get an old phone (or heck, a new 2G phone) going they are as follows: 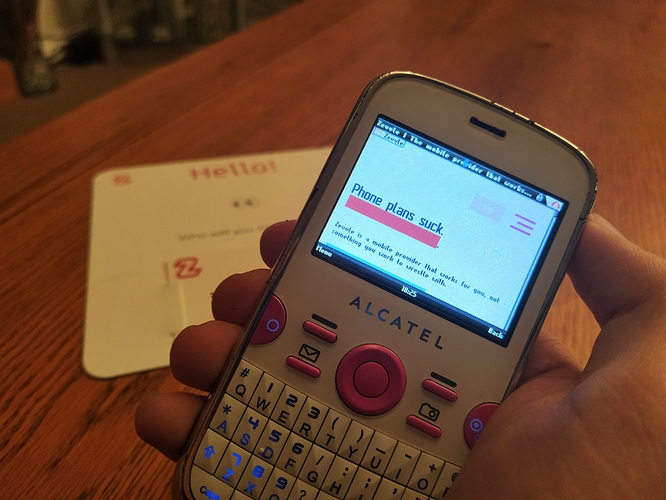 And then thanks to the power of Opera mini most of the web does actually still sort-of work. But no Zevvle J2ME app is a bit of any oversight, don’t you think @nick?

Now to get my old Philips Savvy working too.

Nice! I’ll have to dig out the photos of the random devices I tried a Zevvle SIM in right at the very beginning!

This is so cool, love this, just in case you end up in a situation looking for APN settings again,

I find the APN settings in the help setting of the app.

(At least for iOS Zevvle app)

Furthermore in case people are searching the forum for it because they cant access the app.

Aha, I never even thought to check the app. Sure enough, its there on Android too

Turns out you can teach an old dog new tricks!

I love it!! Thank you for sharing

Sorry about the J2ME app, will bump that up the list…

I’m impressed that it even managed to make an HTTPS connection (given the padlock in the status bar).

I’m impressed that it even managed to make an HTTPS connection (given the padlock in the status bar).

Opera mini routes connections through its own servers, along with also compressing things and stripping elements out. Alas, the built-in browser doesn’t function at all these days since most of the web has binned old versions of TLS.

ION, it seems to have corrected the network name: