I have recently joined Zevvle to give it a try. I keep a close look to the industry and I like trying new things, so this was a perfect match.

The on boarding process was very smooth. I received my SIM card the next day. I liked the personal touch too. Letter with wax seal, personal note and a SIM card that has a rocket drawn with a marker. I do like the general feel I get from the branding and communications that is similar to what other start ups and (some) challenger banks offer.

I am using the SIM with my iPhone XS Max. To begin with, the SIM was recognised as an EE SIM. I believe that it received an OTA update in the next day or so, and now, even though it may still be recognised as an EE SIM, the network is displayed as Zevvle. The carrier profile remains EE. I do have to point out that I am missing VoLTE and WiFi Calling, but I understand that you are new and still settings things up.

I have already given some feedback in the app chat, but I wanted to write some more feedback here.
I have noticed that there is a voicemail service, even though not actively advertised. It seems to be working fine, however there are no notifications when there is an incoming message. It would be great if you can use the phone’s notifications to notify for new voicemail (instead of an SMS as other providers do).

Calling and internet work fine. I rarely use SMS and I have already turned off MMS from the settings. I will try the roaming service in a couple of weeks and see how it behaves there too.
One thing that could be improved is the international calling charges. Even though they are lower than other major providers, they could be much lower to compete with smaller providers. I understand that this is based on your current wholesale prices, but it is something that you may want to look at.

I love the fact that call waiting, call holding and conference calls (which is enabled with the Merge button on iPhones while two calls are active) are supported out of the box.

That’s all for now. I’ll post back when I have more

instead of an SMS as other providers do

There’s a special type of SMS the carrier needs to send to enable the message waiting indicator.

Zevvle should be doing that if possible.

Essentially, that is what I mean @Rjevski. It’s nicer than just a plain old text.

Hello! And thank you for joining, not only Zevvle but our forum as well

It seems to be working fine, however there are no notifications when there is an incoming message.

Looking into why that’s happening; there should be an SMS and/or the voicemail notification feature.

As for push notifications, that’s a good idea – we’re doing some work on the feed at the moment (including better voicemail indication), but we could absolutely send a push message as well.

I understand that this is based on your current wholesale prices, but it is something that you may want to look at.

I don’t know there’s much we can do in the short-term, but when we eventually terminate our own calls we’ll aim to bring these down.

That’s all for now. I’ll post back when I have more

Thank you for the feedback!

I believe that it received an OTA update in the next day or so, and now, even though it may still be recognised as an EE SIM, the network is displayed as Zevvle.

Does anyone know how long this normally takes, or if there’s a way to force the update? I’ve had my SIM in for a couple of hours, but the network is still showing as EE, and I don’t get any mobile data. I assume I need a new set of carrier settings to allow mobile data.

or if there’s a way to force the update?

It can sometimes be hit & miss, but we’ve had some luck with toggling any of the SIM settings to force a refresh, e.g. turn off/on MMS, etc.

and I don’t get any mobile data.

Do you have a previous network profile installed? It would show under Settings > General > Profiles & Device Management…

I’m VERY impressed, I think that out of all the networks I’ve been on onboarding with Zevvle has been the easiest.

All I had to do was download the app, pay my first month and wait for Royal Mail to deliver the SIM.
When it arrives, it’s a matter of typing out the SIM cards phone number to activate it within app and BAM! it instantly connects.

I’ve in the past with other networks had hassle setting up what tariff I want to be on; with staff telling me "Nope, we don’t stock either the cheaper, or “Classic” pay as you go SIMs in-store so you can only buy this phone with this SIM.

My last network was the worst, with a promotion to double all the bundles for twelve months; as an existing customer I had to send more texts to automated numbers and speak to support to get it activated than I had throughout my whole time with them!

I’m loving the Zevvle app and the fact that I can see an itemised view for every call or data session; the same network I was with before I could only see my real allowance by sending a text and receiving no less than four text messages back stating my “allowance” calls and data and then my “promotional” extra calls, texts and data, as the app either wouldn’t or couldn’t show it!

I’ve so far been a customer for little over a day, I can honestly say that so far I’m far more impressed with Zevvle than a company that has many times the number of customers.

Keep up with all the good work!

Thank you for the kind words, Thom!

We’ll do our best to keep it up, and if we falter let me know.

Second Zevvle SIM just arrived. Successful seal on this one. 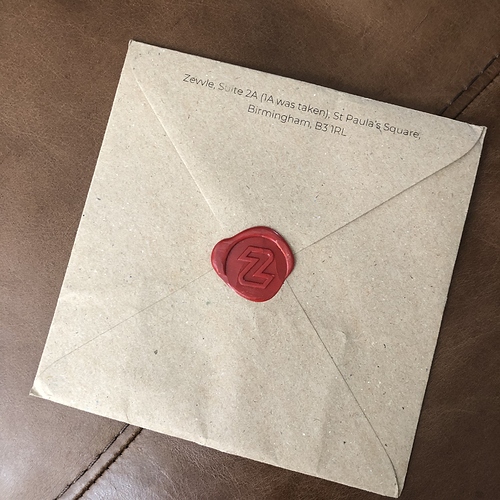